In the Spring of 2019, our congregation partnered with the Casa Alitas Welcome Center to offer hospitality to families seeking asylum. Many within our congregation volunteered to prepare meals, donate clothing and snacks, accompany our guests while at the church, and drive them to the bus station or airport. Unfortunately, this year we saw a shift in the needs of this population. Due to the Migrant Protection Protocols (MPP), also referred to as “Remain in Mexico,” individuals and families seeking asylum were no longer allowed to ask for it at our border as the law allows. Eventually, we began to hear of the extreme difficulties faced by these families now stuck in Mexico without adequate housing or sources of income to buy food, medicines, and other basic needs.

As a response, concerned faith communities and organizations working at the border organized Save Asylum, a working group to stand in solidarity with and work alongside families demanding their right to seek asylum. First Christian recently became a sponsor of this group with Janis S. as our representative. Here is her update on the group’s work: 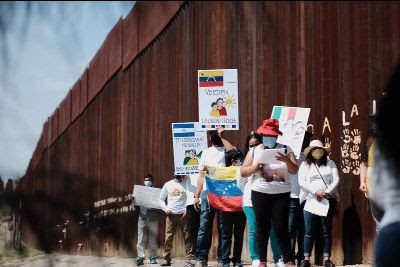 On September 21, 2020 a group of over 90 people met on both sides of the border wall separating Nogales, Sonora and Nogales, Arizona to protest the detention of families seeking asylum while they await their hearings. The event began with more than 60 migrants marching from downtown Nogales, Sonora to the port of entry for a moment of prayer. They continued along International Street to the border wall where they were received by supporters and advocates on the U.S. side of the wall. Together, this binational #SaveAsylum coalition, made up of migrants and civil society groups that are both secular and faith-based, listened to and validated the testimonies of asylum seekers who are awaiting their U.S. asylum hearings in Nogales as part of the Migration Protection Protocols (MPP), otherwise known as ‘Remain in Mexico.’ In an act of ‘civil initiative,’ we took part in this action, and take part in future actions, as part of the ongoing #SaveAsylum campaign to address the failure of the U.S. government to adhere to international and U.S. law, as is evident in the inhumane and illegal implementation of ‘Remain in Mexico.’

The next march will be a Children’s March on October 21st at 11:00 am in Nogales. Please contact Janis S. if you would like to join us.