WHO WE ARE Culture is an important element with all Yaqui communities and bonds both Christianity and Yaqui spirituality in the hope for a better view of the world and morality. An example of Yaqui spirituality is the iconic symbol of the deer and the deer dancer who mimics the connection to which Yaqui people have to nature. There is such a rich cultural identity, spiritual values with the merging of two faiths, and traditional practices both ceremonial and modern for the adaptation of preserving what make a Yaqui, Hiaki. 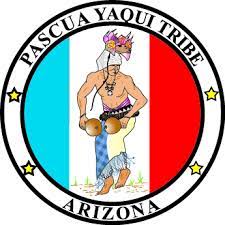 DIG DEEPER: Inside The Flower World Of The Yaqui Deer Dance. Where Indigenous And Christian Spirituality Go Hand In Hand:https://sinchi-foundation.com/news/flower-world-yaqui-deer-dance-spirituality/

Culture and Spirituality of the Native Peoples of the Sonoran Desert: The Yoeme: https://www.nps.gov/articles/yoeme.htm

A Poem of Responsibilities
In the beginning, like this,
Our grandfathers,
The ones who are grandfather Surem,
The ones that first appeared here,
They left this inheritance.
Then the Baptized People received it
And were given it.
Like this, now, it is continued in the songs.
It is known like this.
This is all the knowledge that was told to us,
But we still work poorly with it.
Perhaps we are not taking care of it like the ones
who stood up to it in the beginning.
But for the births that are coming,
The people you are going to talk with about it,
Like this the inheritance is left.
This is cherished and respected.
This is all the truth you asked for.
Like this it stays in your hands.
– singer Loretto Salvatierra